The ESB.Extensions framework is out!! You can download it here.

When the ReceivePipelineService executes, the following steps are performed:

The following drawing depicts an itinerary, which I have titled “OneWay-Debatch-MessageSendPort” (ODM) that uses the ReceivePipelineService:

Fairly simple scenario, you send an order batch through an itinerary onramp to BizTalk, where the ReceivePipelineService orchestration will pick it up, debatch it using the receive pipeline, and forwards the order items to the Message SendPort. (i.e. bound to a FILE location).

Debatching is one obvious application for the ReceivePipelineService, but you can specify any receive pipeline type in the resolver, so it can also be a 1:1 scenario where the pipeline has only 1 output message. I’m fairly certain that it will not work with FFDisAsm pipelines, though!

When the SendPipelineService executes, the following steps are performed:

The ESB.Extension implementation let’s the resolver decide which message is up next, so the resolver (i.e. BRE) could access a database or any other (in-memory?) representation of the message sequence (or batch) to determine who’s next. In my BizUnit tests I have used the simplest possible scenario, where the maximum number of messages is always 5 and the next SequenceId is simple determined by incrementing by 1.

Below a scenario that uses the debatcher, aggregator and resequencer services: 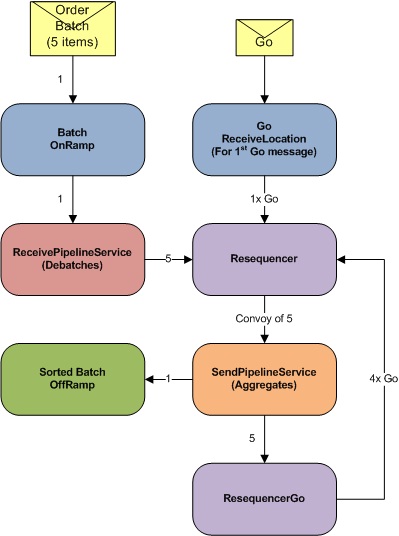 In this scenario, the orderbatch gets debatched, every order item gets picked up by a seperate Sequencer instance. The 1st Go message, corresponding to the 1st message (SequenceId == 0) is sent to BizTalk, triggering the 1st Resequencer to release the 1st message. That message gets picked up by the SendPipelineService, and the SendPipelineService stores the pipeline input message, then itinerary-advances and republishes the original message, which triggers the ResequencerGoService to increment to the next SequenceId and publish the corresponding Go message. This process repeates until all messages have been processed (the ResequencerGo’s resolution works out when it is the last message and does not publish a new Go message when it is the last). The SendPipelineService aggregates the message, applies the itinerary and ships it off to the offramp.

A select number of scenarios has been described here, and these are also the scenarios that have been tested. But there can be many many other scenarios, ranging from likely to not-in-a-million-years, that could be implemented with these services: